Laclin Linux: Bundled Distros
O wad some Pow'r the giftie gie us
To see oursels as others see us
Bundled Distros are my Favorite Bistro...
TBD
Laclin Home
Contact
This page

Laclin comes with Docker plus a number of Linux distros stored in Docker format. Some of the distros include complete toolchains.

Here's Laclin running Docker 19.09 running Thunderbird in Slackware 14.2, LibreOffice in Arch Linux, and Tea in Debian 10 simultaneously. The GUIs are going to the Laclin desktop in each case.

Your phone or window is too narrow for the image. If it's a phone, try rotating the phone or switching to a PC. Or click here to go to a copy that may be zoomable. 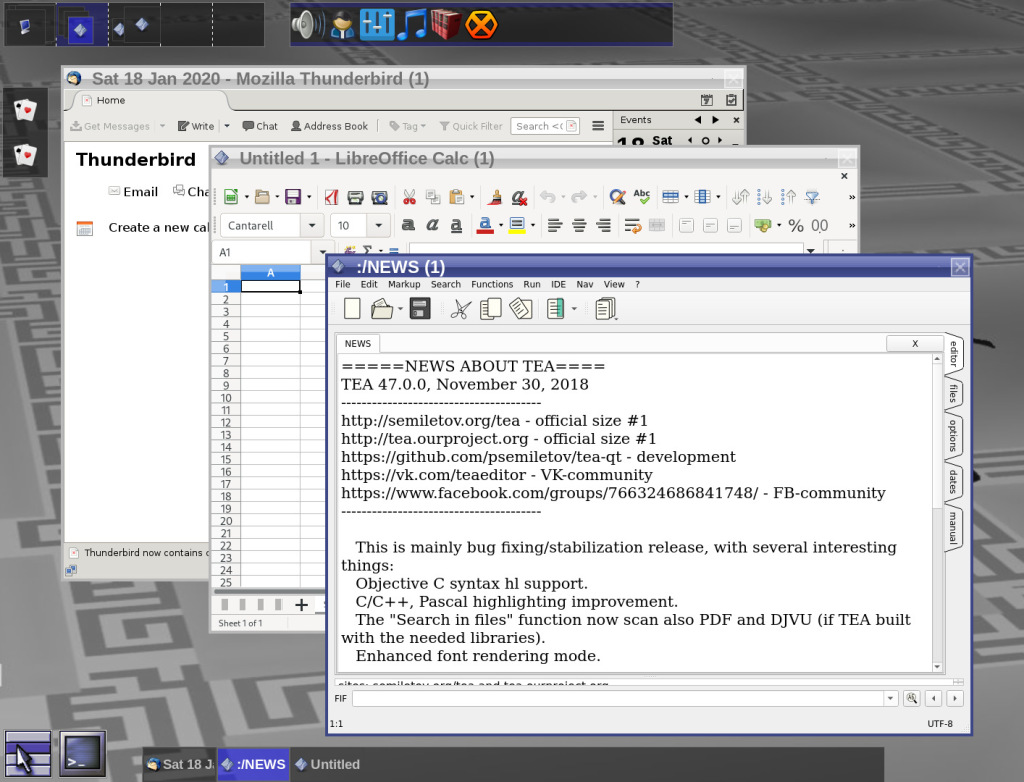 There are limitations to the bundled-distros feature. For example:

* You can't run the desktop from a bundled distro. Just individual GUI programs from the distro.

* Many GUI programs won't work. This includes KDE programs, programs that require DBus or other system services, and random programs such as “leafpad”.

* Fonts typically need work on the client side.

If you're running CLI tools, most problems other than the system services issue go away.

Docker has issues of its own. Most importantly:

* Docker isn't designed to run long-term sessions. So, for example, you shouldn't use it to run a distro or individual application as part of a server.

Typically, you'd run a distro or application for a specific time-limited task such as a port or to play a game.

* Docker is fragile and requires maintenance. Tips are provided.

This said, Laclin presently bundles the following Linux distros both as minimum copies and as large copies with batteries included:


The following distro ports are under construction:

Some of the bundled distros are obsolete or will become obsolete in the medium term.

However, this doesn't mean that copies are useless. To the contrary, if you're a developer who needs to support a business that's using an obsolete distro, a batteries-included copy of the distro may be helpful.